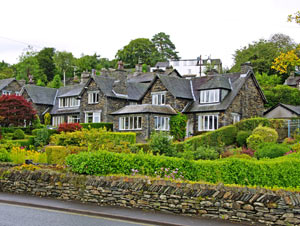 According to the Office for National Statistics this morning, UK property prices rose by 6.1% in the year to September 2015, up from 5.5% in August. The biggest jumps were seen in the east and southeast of England, and London, as usual.

Meanwhile, housebuilders have been reporting that business is booming. Taylor Wimpey's chief executive has reported a record order book, boosted by wage growth starting to outpace inflation. It appears that construction is now rising to demand and supply of housing in the UK is increasing.
In the past year, more than 155,000 homes have been built, up by 25% year-on-year- significantly higher than previous estimates of just over 124,000 new homes. They feel they're not getting enough credit for contributing to supply.

In addition, more than 20,000 new homes were created by converting commercial premises. That was up by 65% on last year. In some cases, established businesses have been evicted by landlords keen to benefit from the increase in their property's value that comes from its conversion to residential use.

In London, more than 24,000 homes have been built, compared to earlier estimates of just over 18,000. Some of the capital's most expensive areas saw their housing completions more than double in the most recently published statistics.

However, there is another major factor in the UK housing market, which explains affordability problems which is that it's not just about the supply of houses – it's about the supply of money.
With mortgages harder to come by and cash sales to investors an ever more important part of the market, it's hard to see what will replace demand when interest from foreign buyers starts to wane. With interest rates still more likely to rise than to fall further, support is unlikely to come from the ordinary buyer in the street.

Estate agent Savills has published research highlighting the scale of the looming affordability crisis in UK housing, claiming 350,000 people will need financial assistance to rent or buy property by 2020. According to the figures, around 70,000 new households a year will be unable to afford the market rate for rental or mortgages each year for the next five years.

Houses for sale in the run up to Christmas are typically priced lower to attract buyers in a quieter market, but with low mortgage rates holding up demand at a time when supply remains low, asking prices have fallen by just 1.3 per cent, according to The Times.

Overall, the outlook for the UK property market in 2016 is generally bright, with conditions for homebuyers expected to ease, improving affordability and slowing price growth to more sustainable levels.