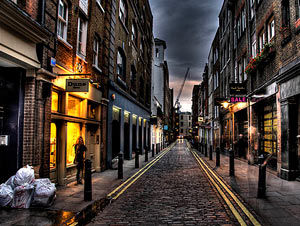 Sky high: London property prices are double those in the rest of England and Wales Photo: Martie1Swart
Do you own a UK home? Good news! You are now £76,000 better off than you were 10 years ago.

New figures from Halifax show that the value of private homes in the UK has risen by £1.8 trillion overall in the last decade, from £3.3 trillion in 2005 to £5.1 trillion in 2015. That rise of 53 per cent translates to the equivalent of £76,316 per household, which means that families and homeowners are over £70,000 better off.

Rocketing house prices mean that the value of the UK private residential housing stock has grown at a faster rate than consumer prices, with the retail price index up by 35 per cent in the past decade. In the past year alone, as a severe supply shortage leaves the UK struggling to meet booming demand, the value of private housing stock grew by £262 billion.

The bad news? The soaring property value comes at a cost: the value of mortgage debt has also risen 35 per cent since 2005, from £942 billion to £1.28 trillion.

Nonetheless, the value of the private housing stock has grown by over five times as much as the outstanding mortgage debt - £1.8 trillion compared with £334 billion. As a result, housing equity has increased by £1.4 trillion over the decade, from £2.4 trillion in 2005 to £3.8 trillion.

There is, naturally, a wide variation in property wealth across the UK, just as there is a gap between regional property prices. London, for example, has an estimated £1.1 trillion of private housing, while housing equity is £798 billion, the equivalent of £305,749 per household. The next largest is the South East (housing equity of £722 billion, or £223,197 per household) and the East (£461 billion, £212,263 per household).

Indeed, the North-South divide in the value of the private housing stock has widened since 2005, with the value of housing in the north increasing by 36 per cent and in the south by 66 per cent.

The extreme difference in housing values was confirmed recently by the Land Registry which revealed that house prices in the capital are now double the national property average for England and Wales. Indeed, in the last year,London house prices have risen by £5 on average every single hour. How many hours are in 10 years...?